Plastic. The savior of the modern day human, and the solution to all of our daily problems.

What could we do without it, now that we have gone and invented it already?

The answer is, that we couldn’t do much. I once tried living a day without touching anything that’s made from plastic, and I lasted 2 hours. A challenge that sounded extremely easy to accomplish, but once you try, seems impossible.

I mean just think about it. You wake up, maybe you brush your teeth? Well there you go, the toothpaste comes out of a plastic tube, and the brush is made out of plastic. What’s next? Maybe you have some bacon and eggs for breakfast and then you realize that the bacon is wrapped in plastic. And what we’re you going to cook the bacon and eggs with? Let me guess, a pan, and some plastic cooking utensils…

…Maybe you want to hit the gym after breakfast, which means that you’re going to need some water, and where does that water go into? That’s right, straight into a plastic bottle. Oh, and after the gym, what about the recovery drink? Maybe mix some whey powder and milk together in a plastic shaker bottle.

To put it mildly, we are surrounded by plastics.

Some might argue that it’s a good thing, and surely, plastics are extremely useful in multiple daily tasks, but they also have a flip side. 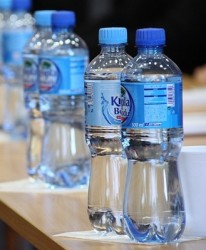 I know what many of you guys are now wondering the exact same thing as I was years ago.

How could plastics do anything for the human body? And what makes plastics so bad?

I mean the whole idea of plastics being harmful sounds like some tinfoil-ufo-controversy-BS at first. But once you understand the idea behind the harmful effects, you also understand what makes plastics unhealthy.

In short, the load of xenoestrogens and endocrine system toxins that gets into your body through the usage of plastic products, is easily enough to cause damage in your endocrine system and testosterone production.

Here’s some science about the matter:

a) This Swedish study had 196 boys as subjects. The researchers measured phthalate levels from their mothers when they were still pregnant, and once the kids were 21 months old, their “anogenital distance” – which is a pretty solid physical measurement of testosterone – was measured, to see if the phthalates had an effect on the hormonal health of these 196 subject boys. The results were clear, the more phthalates the mother had in her system during pregnancy, the shorter the anogenital distance in the baby (the shorter the distance the lower the testosterone).

e) This study found out that the phthalates used in the manufacturing process of flexible plastics can be considered xenoestrogens, due to the fact that they bind into estrogen receptors and induce feminizing effects in the body.

f) In this study, the researches analyzed 18 different samples of bottled water. Eleven of the samples showed a significant estrogenic response.

There’s hundreds of similar studies on the internet, and if you’re interested in seeing more of them, Google is your friend.

How come these chemicals can be found inside the human body? I don’t eat plastics!

Answer: We get most of the chemicals mentioned above through foods and drinks. For example: most of the meat products, fish, processed foods, and certain oils, and spreads are all packed in plastic wraps/packs. Bottled water is also loaded with phthlates (this study found that out of the 18 analysed samples, 11 induced significant estrogenic response), and fast foods are filled with phthlates.

Microwaving plastic is also one extremely efficient and quick way to load up your body with phthlates and BPA, as is drinking soda (just think about all that acidic drink sitting in those freshly produced soft plastic bottles for months).

Is there any proof that humans are altered to these chemicals, or is it just a theory?

Is there a way to avoid this exposure then?

Answer: Yes of course. Just avoid plastic products as much as possible (you can’t avoid them completely though). Don’t drink bottled water, soda, etc. If there’s a relatively useful alternative to plastic products, made from wood, metal, or ceramic, etc. use it instead.

Let me give you some quick examples:

There you go, a few reasons to avoid plastic products, or at least use some hormonally healthier alternatives, such as wood, metal, glass, or ceramic.

Take the pointers from this post and educate yourself with the studies, it’s an easy step to a healthier life and improved hormonal balance, and it’s pretty much free, or at least very cheap.